The last post really brought about a frustration, there are SO many fakes on the Internet these days.  I had an encounter 45 years ago, the craft was much like the classic 50’s or 60’s flying saucer, including tripod legs.  The exterior and interior had a brushed aluminum appearance, seamless except for the apparatus I will describe and mounting hardware for same. The beings were nothing I’ve seen on the Internet exactly nor nothing I’ve seen described.  They were short, maybe 3-1/2 to 4 feet tall, and thin like the grays are often reported to be but they weren’t gray.  They were beige, like Caucasian skin less the blood that gives it the pink hue.  Their heads were proportionally larger than ours but not the monstrous things so often depicted on the Internet.  They were bald, they did have big black eyes.  I couldn’t see what their fingers looked like as they wore a one piece jump suit that included gloves.  The fabric was weird, it had a metallic iridescent dark green color like you might see on the back of some beetles.  They were not very communicative in any spoken (external or telepathic) sense.  The only communication that I remember was a hand motion to come from a being on board their craft.

Unlike typical abductees, I wasn’t snatched from my bed, rather I had a strange urge to take a walk in my pajamas at 4AM to the woods next to the elementary school, which was out for summer, that I attended, about six blocks away.  There was a large clearing in the middle of the woods and the craft was already there when I arrived.

There was a ramp down to the ground just like in This Island Earth, but it wasn’t as high or large.  There was no walls inside, it was one room that took up the entire craft except there would be space under the floor.  The ramp actually went up to about a foot above the floor, and then there was a shorter ramp down to the floor inside.

At first I didn’t see any beings inside the craft and my initial thought was, “I’m going to go in and figure out how to fly this thing and steal it and give us humans this technology.”  (I should add that I was ten years old at the time) Then I spotted a being and was somewhat struck with fear in as much as I was afraid that the being might somehow know my thoughts and desire to punish me.  But instead the fear left me and it motioned with it’s hand the way a human would motion to come and so I did.

I went into the craft and I noticed it was very stark, no facilities of any kind visible except what looked like a glass tube about six inches off the ground and a couple of inches from the outside wall around the inner circumference of the craft which was around 25 feet in diameter.  The distance seemed to be about the same length as a room in our basement which I know to be about that long.  The minor diameter of this tube was about 3-4 inches and it appeared filled with mercury.  It went under the ramp that descended to the floor inside and to one side of the ramp there were too coils of copper wire and they appeared to be connected to something that looked like an over sized car battery with external inter-cell connectors and only three cells.  And that was the only obvious visible technology.

The lighting was strange, there didn’t seem to be a source and yet it was well illuminated inside.  It was as if the light came right out of the air, everything was lit but there was no light source or sharp shadows, very diffuse. 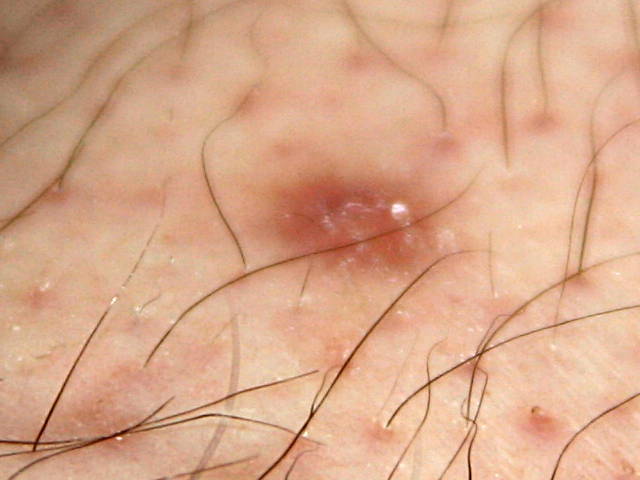 This is a picture of the scoop mark 45 years later. It’s never completely healed.

And then I was home in bed, even though I have memory of walking down and entering the craft, I have none of leaving or returning.  I was ready to dismiss it as a wild dream except for two things, I had a classic scoop mark on my shin and my pajama legs had clay on them.  There was no clay around my house unless you dug several feet into the ground, but there was clay at the surface in this wooded area.

So this is why I have an interest in extraterrestrial life to this day.  I’ve never had another experience.  I’ve met others over the years who have had experiences but they all were of the more typical abduction type that you read about so often.  I’ve never found another description of creatures that match what I saw.  I have so many questions and so few answers about these beings.  I do not know there agenda, although I have some speculations.  I want to know more.

There are some things I have concluded about this craft.  Where ever it is from, it can get from there to here and back almost instantaneously.  The fact that there were no chairs, sleeping facilities, restroom facilities, food, or even water stores meant that it had to get from somewhere to here and back almost instantly.  It’s possible it may be like a shuttle and dock with a mother craft that is in orbit or nearby, which does have facilities for a longer trip, or it may be that their technology is so advanced, they can travel vast distances in a blink.

Also I’ve concluded that they can’t slip in and out undetected, even with the technology that we had in 1968, because I went back that afternoon to see if I could find any remaining evidence, like impressions where the tripod legs sat.  The city had cut much of the trees surrounding the area exposing it to view from the street and they’d bulldozed the entire clearing flat and were in the process of turning it into a park.  That this should happen on the same day seems like too much to be coincidence.

Unlike abductees, this is the one and only experience I’ve had in my life.  Also, unlike typical abductees which are abducted along family lines, I don’t know about my genetic parents as I was adopted three days after birth, but my children have never related to me any similar experiences.

While I’ve had some experience with psychedelics, that was years after this experience.  The scoop mark remains to this day.

There are no photos of the cube UFO that allegedly appeared over El Paso Texas here.  The reason?  Not a one of them is not copyrighted.  That’s my first clue that this is bogus.  I’m wondering what they’re promoting.  Seems no coincidence the resemblance to the Borg.

Another clue, despite supposedly being witnessed by a number of people, seems only still images exist.  Odd that everyone and their brothers carry cell phones capable of video these days.  I guess it’s hard to do video in Photoshop, although there are tools for that, obviously the creator of this didn’t possess them.

This is actually the downside of modern computer and software capabilities.  It’s possible to fake almost anything.  That said, I’m wondering what the purpose of this is, if it’s anything more than to get SecureTeam a lot of hits to their youtube videos.  They seem to be the new 3rd Phase of the Moon except 3rd phase is more focused on video.

So I’m curious if this is part of a viral marketing thing for a new movie coming up, but if it were they’d have high quality video not amateurish fake photos.

In the early 80’s I saw a VHS tape with a supposed army officer revealing how the plan of the ruling elite to maintain control over us would unfold.  At the time, we had the cold war still going strong with Russia and even China to a degree.  It was much like the scenario in 1984 except that it wasn’t an actual hot war, just a lot of threats and arms building and general belligerence.

This tape suggested that this would end and so a new common threat would be found and that would be terrorism.  Indeed, when the World Trade Center was demolished (yea I know they crashed planes into them but I’m talking about the thermite used to cut the beams and the controlled explosions sequenced off a floor at a time that were so obvious in the footage) in September 11th of 2001, a new reign of fascism ensued with the creation of the Department of Homeland Security. The 1st, 2nd, 4th, 5th, 6th, 8th, and 10th amendments were all thrown out the window.  So the tape was accurate in this prediction.

This tape also predicted that eventually people would realize this was a ruse and the next fake common threat would be a fake invasion from outer space.  And now I am finding rumours of such an impending fake invasion across the Internet which makes me wonder when this will come about and how they’ll pull it off.  I say when and not if only because all the other predictions made in this tape have thus far been dead on as preposterous as they seemed.