Friday, December 8, 2006 (Re-posted because some turd hacked my WordPress site and deleted it.  Now have fail2ban hopefully will prevent a recurrence.)

UFO Encounter
I used to have a bedroom in the basement of my parents house, the rest of the family slept upstairs. There was a door leaving the basement so I could leave the house without coming upstairs.

I went to an elementary school about six blocks away. To the south of the school there was a large area surrounded by woods except for the fence and playground of the school to the north. The area was mostly bare, high clay content, not much in the way of soil, just exposed clay.

I need to preface this by saying I don’t know how much of this is a dream and how much was real, but there was physical evidence that I went somewhere which I will elaborate on later.

One night I found myself compelled to leave the house at 4 AM, and for some reason the idea of getting dressed and getting shoes on didn’t occur to me. I left the basement in my pajamas and barefoot and walked down to this clearing which was about four blocks away.

In the clearing there was a landed saucer. It looked similar to this one: 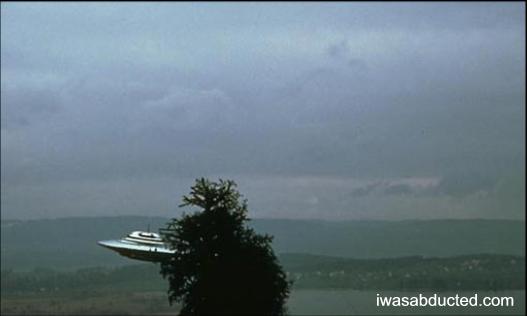 This one isn’t exactly like I saw but was one of the closest I was able to find on the net. The craft that I saw didn’t have the pronounced hump on top, it was more like a straight slope.

The craft had a opening with a ramp down to the ground. I couldn’t see anything inside the door from where I was.

For some reason, I had it in my mind that aliens had left the craft to explore the surrounding area and I had it in mind to enter it and see if I could figure out how to take off and steal their craft. Silly, I know but then I was ten years old and not in a normal state of mind.

As I approached the ramp, I saw a being on the left side of the entrance looking out at me. I was frightened at first, but then he motioned me in with a hand motion, like a human would motion. I refer to him as ‘he’ but in truth I don’t know what sex it was or if their race even has sexes.

I thought this was an opportunity of a lifetime, and if he wanted to take me forcibly he would anyway so there wasn’t anything to be gained by not entering, so I did.

From this I concluded that this craft was intended for very short duration trips, much like an automobile. Either it was capable of traveling vast distances nearly instantaneously, or it was a shuttle of sorts and there was a mother ship nearby. I don’t have anyway of knowing which but I had the feeling the first situation is most likely.

Other than the lectern like piece of furniture or equipment, the only other thing in the craft was what appeared to be a glass tube about a foot inside the wall and about a foot off the floor that went around the inside circumference of the craft. The tube had a minor diameter of about four inches and appeared to be filled with mercury.

The ramp from outside actually came up to the opening about two feet above the floor of the craft and there was another short ramp inside leading down to the floor. The mercury filled glass tube went under this ramp at the entrance.

Just to the left of the entrance, there was what appeared to be two coils of copper enameled wire, about 16 gauge around the glass tube with spacers that looked like phenolic, like this:

Where the ‘===’ is the mercury filled glass tube, the ‘|’ the spacers, and the ‘+’ the coils of copper enameled wire.

The wire was connected to something that looked like an automotive battery except that it had only three cells and the inter-cell connectors were external.

There was no obvious control mechanism, but I got the feeling this device was responsible for the drive of the craft.

There was no obvious light source, it just seemed to come from nowhere.

The beings were different than any I’ve heard described. Physically, they were short, maybe 3-1/2 or 4 feet tall and thin. Their skin tone was not gray, it was closer to a light computer beige. Their eyes were not “bug eyes” like grays are described as having, but they were larger than human eyes. Their heads were disproportionately large for their bodies but not to a great extent. They wore a one piece jumpsuit that had an iridescent metallic dark green appearance.

Then I found myself at home in my bed with no knowledge of how I got from inside of the craft back home. My initial thought was that I had just dreamt the whole experience, however, the bottom of my pajamas were wet with clay.

Around my house there was thick topsoil, you’d have to dig down three or four feet into the ground to get to clay. That clearing next to the school was the only place I knew of in the area with exposed clay.

The following day I attempted to go back to the clearing to see if there was an impression where the craft had landed or other visual evidence, but there were bulldozers down there flattening the area and spreading soil for what was to become a park. So any evidence that had been present was covered or destroyed.

They also thinned the trees along the perimeter so that the area was visible to people surrounding it.

I had no history of sleep walking prior to or after this event. For some reason the next morning I also did not want my mother to know so I washed my pajamas myself to remove the clay.

I don’t know exactly how much of this is real, how much is dream, how much is a screen memory, etc. I have heard Whitley Strieber refer to his experiences as dream like, but other aspects of his experience are completely different than mine.

It was this experience that has made the subjects of UFOs, aliens, faster than light travel, time travel, and the paranormal in general interesting to me.