The Story of Finisterre 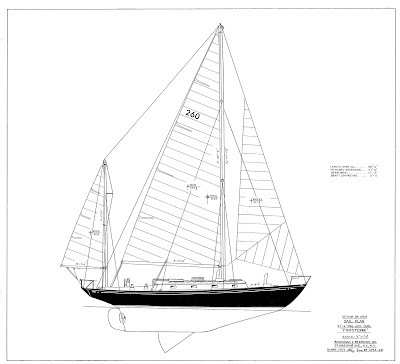 In 1954 the Olin Stephens designed yacht Finisterre was launched, to late for the Bermuda race that year. She was a 38 foot centerboarder and there is no more accomplished racing yacht. She ranks as one of the most significant yachts in the history of the sport.

Carleton Mitchell, the owner of Finisterre, is the author of the book Islands to Windward. He had developed a sailing style that was not in concert with the era of the deep-keeled, long-ended windward leeward oriented ocean racers. Mitchell had previously owned a 58-foot centerboarder, the Rodes-designed Caribbee. Michell wanted to prove something by racing.

With Finisterre, he humiliated hundreds of deep fixed keel race boat owners by holding the honor mooring spot off the Royal Bermuda Yacht Club from 1956 to 1962, a spot envisioned for a much larger and deep draft vessel.

Prior to the build, Mitchell put his ideas in articles which were criticized, putting him in the awkward position of potential publicized failure. Finisterre was built at the height of custom yacht design. His notion of a vessel that would be like having your cake and eating it to, that would be small enough for single handling, comfortable enough for luxurious cruising, able to cross oceans and fast enough to win races was not popular among the all boats are compromises mindset. The fact that the vessel would be a centerboarder undoubtedly angered many who had worked for years to discredit this foil type.

Bill Robinson, in Legendary Yachts, relates the story of Stanley Rosenfeld, the photographer, who in following Finisterre for a photo shoot, noticed little of the creaking that he listened for from the helm of his subjects to identify just the right distance and angle for good photos. Robinson believes the lack of that noise was part of the secret to this vessel and so do I not that anything about Finisterre was secret, it all being public record owing to Mitchells wish to prove something.

Pat Royce in the 2000 edition of Royce Sailing Illustrated notes that Mitchell used the swing keel for steering The centerboard is down all the way when beating to windward in a light breeze. As the wind increases the centerboard is raised sufficiently to trim the rudder to reduce weather helm rudder drag. Pg 17

Winning races unfortunately does not prove anything to those who are closed minded. Robinson lists many reasons for Finisterres success ranging from Mitchel’s knowledge of weather to winches but does not connect the centerboard dot as a reason for her success. Retracting foils helps the vessel to surf or plane. Finisterre was able to surf the storm fronts owing to this thereby bettering her “betters”. She was greatly immitated by other builders and this immitation lead to rule changes tending to reduce the success of her type acording to Robinson. That success should have spawned rules limiting progress in design is a tragedy only now being undone by vessels like the AC72s. Huzzah to Oracle, Larry Ellison, and the 34th America’s Cup.