Some people in the park practicing acrobatics. 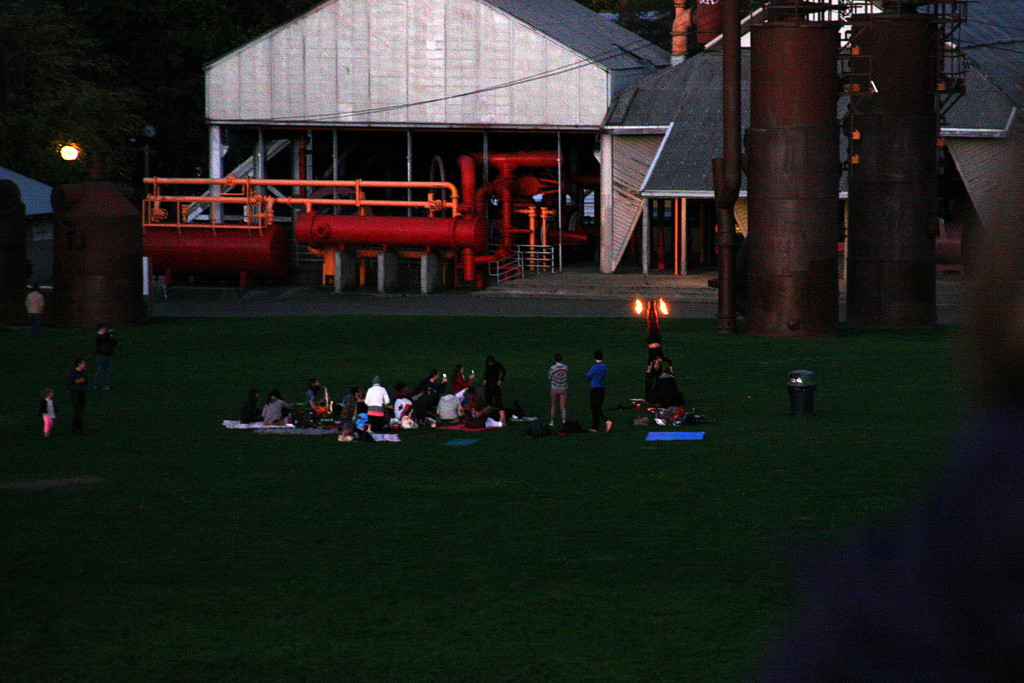 Eclipsed moon, not quite in totality just after it got dark enough to see. 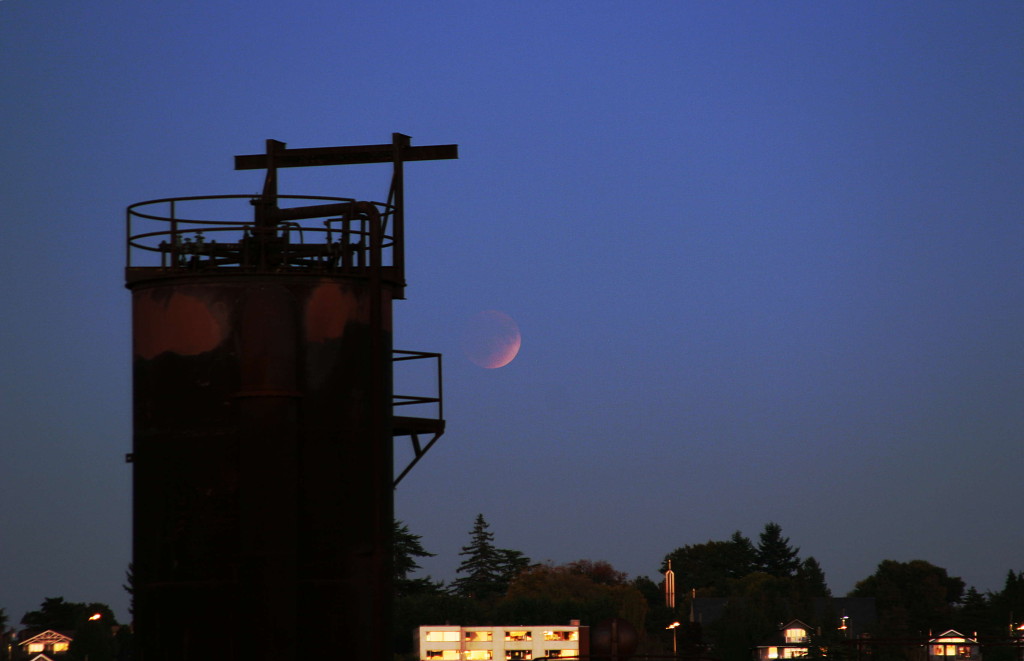 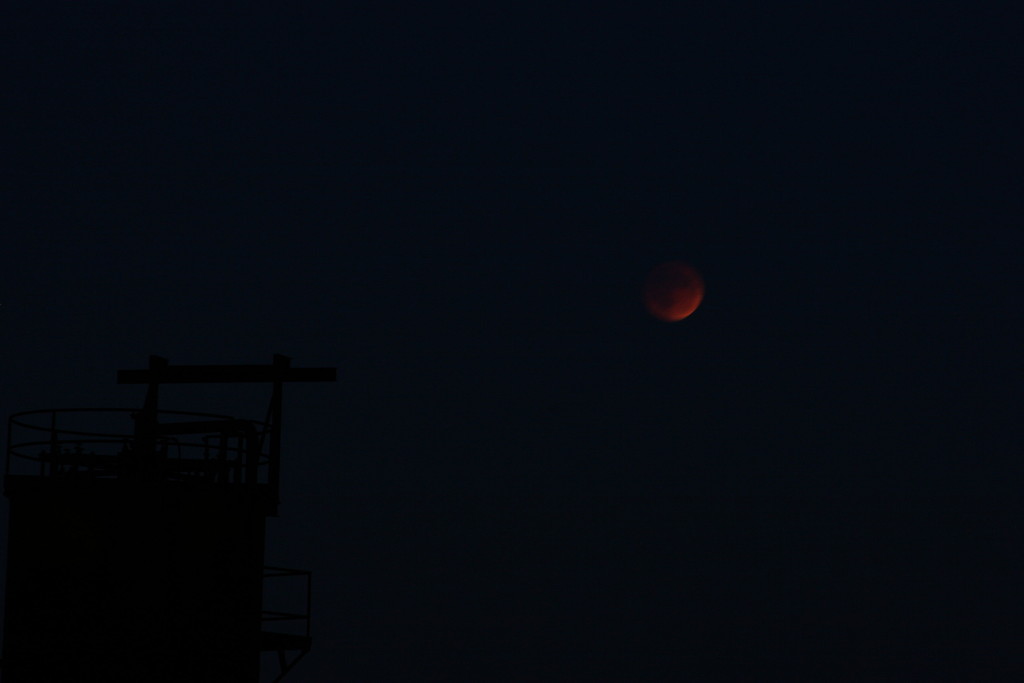 I’m not suggesting we should start killing more women, I am suggesting law enforcement should stop killing PEOPLE of any race or sex and LAWMAKERS should change the laws so that nobody is immune and everyone is equal under the law.

It’s not that I expect people to believe it when I say it, which is why I simply linked this article. And I guess it’s not like I expect most people will even care, after all if the police kill someone they must have been doing something to deserve it, like carving wood at Pike Place Market. I just want to make sure it remains in public sight. I’m hopeful that eventually I won’t be the only one who has a problem with law makers and law enforcement being exempt from the laws they make and enforce up to and including murder.

Had a couple of very odd dreams last night, don’t know what to make of them but they seem somewhat thematically related.

In the first, I was in this kind of wooden hut with one side opening to a cliff wall.  The cliff was maybe 12 feet high and there was a flat plateau above.

I was on a motorcycle with a winch that was somehow mechanically tied in with the motor so if terrain was too steep to climb you could tie one end of the rope to something high and then use the motor to drag the motorcycle and rider (me) up the steep surface.

I was trying to find a way out of this shack and it appeared the only way out was up the face of this cliff with the motorcycle.  There was a pole or something up above so I threw the rope up and it wound around, I was afraid I’d fall off the motorcycle when it went vertical but gunned it anyway and up the face of the cliff I went and then I was on top looking down at the shack.

Looking down I noticed it had open windows on either side of the structure that were up high enough that anyone standing on the ledge, I could reach their hands and pull them up so it was my intent to bring the others up with me but I woke out of the dream at this point.

Upon going back to sleep I had another dream.  In this one I was in the back yard of the house where I grew up on 15th and 90th NE.  I looked up and saw this long tubular object, kind of looked like a 787 with it’s stubby wings except much longer and it was flexible and moving very slow.  Kind of a side to side slithering motion like that of a snake.

Descending from this craft were two rope ladders and when when it went over my yard, the ladders descended to almost ground level.  On the rope ladders were people doing acrobatics of some sort like something you might see in the circus and they and the rope ladders passed through my back yard and my neighbors and then went back high into the sky.

Thematic relationship, both dreams involved heights that seemed dangerous but were safely handled by the people involved, in one dream that was me, in another it was other people.  Both involved ropes to climb or pull oneself up with.  How this relates to real life I don’t know but the vividness of these dreams, the similarity of themes, would suggest there is something my subconscious wants to bring to my conscious attention.  That and the fear involved and the perceived need to conquer it resonate with me very deeply.

My auto is in the shop getting repaired (fails emissions and leaky heater core) and it needed a tune-up as it is 15 years old with 170,000 miles and still running on the original plugs, so today I hoofed it to the post office which is about two miles there and back.

I was okay with that from a physical standpoint but the boredom of it was excruciating.  I got used to everything going by at 60, and walking is okay when there is something to look at, but what they’ve done to this neighborhood only depresses me.  Lots of ugly apartments where trees used to be.

Nobodies account is scheduled to expire tomorrow so I’m going to skip the post office trip until Friday when my auto is supposed to be ready.

There seemed to be a lot of allergens in the air, my eyes teared up, my nose started running.  Took some allergy medicine when I got back, hadn’t taken it for a while so wasn’t used to it, quite sedating, pretty much made for a non-productive afternoon.

My wife who was riding with me said the traffic was heavy, I navigated it fine, even was nice and let someone in that wanted into my lane, but I remember none of it.

This is very abnormal for me. I am normally quite aware of where I am and how I got here.  I think this is part of what allows me to have lucid dreams.  But not today.  I was sleep deprived the night before last, but slept reasonably well last night.

I took the afternoon off and went to the Puyallup Fair.  I brought along a camera intent on taking a bunch of photos and sharing them with you upon my return.  But when I got there, and turned on the camera, nothing.  A quick check of the battery compartment revealed that I had left the battery at home on the charger.

I enjoyed the Fair but would have enjoyed it more and longer if I could have shared.  I used to be able to drag my kids with me, but they’re grown up, one is 900 miles away and I’m not allowed to contact, another doesn’t speak to me and is I don’t know where, a third can’t be dragged away from video games that long without going into convulsions, and my oldest never has time anymore or can’t get girlfriends permission.  I know it’s only going to get worse as I get older but sooner or later I’ll die then it will be resolved.