The first was really not at all like I remember it, the school much different.  And it’s vague now as it has been several days but I do remember the feeling of loss associated with knowing I would never see many of the people there again.

The second much more detailed, they had divided the last three days into half days with each half day being one of the classes we took, one of what would normally be six periods.  The last half day after those three was some big general assembly.  This is the dream,  not the reality.

In this dream I couldn’t remember where the classes I was supposed to go to were.  My memory was much worse than my actual memory in waking state.  But the feeling was the same, a feeling of intense loss, knowing I would never see many of these people again in this life.

I am approaching my 57th birthday, and it comes just a few days after Halloween.  Two reminders of death in a very short time span.

And there are people I know I won’t see again in this lifetime, my mother who has passed on.  And perhaps my daughter and youngest son.  Not to say that isn’t deserved but it is still hard.

I didn’t head the warnings, I grew up with some funny ideas about love and sexuality that weren’t corrected until I spent 2-1/2 years in prison and two years in sex offender treatment.  I had this idea that love and sex were intertwined in a way that made them inseparable. Didn’t really understand how else to express love.  And didn’t understand how mashed together these feelings were in my mind until an assignment I had in the sex offender treatment program in prison asked me to define the various types of love, and while I was able to do so, I also realized in spite of intellectually knowing the difference, I could not feel the difference.

I was unaware of that at the time and acted upon what I felt and the result was 2-1/2 years in the slammer, three years in community custody, and a loss of some rights for life, and most importantly harm to and alienation of part of my family.

I’ve also learned another lesson but not from prison or the program but rather from the Bible, and that is love is what you do and not what you feel, and that it’s the whole purpose of God, and if we act according to his purposes, also for our lives.

Still now, often fear and not love rules my life.  I am afraid of helping others when I can because I don’t feel I have enough resources or that God will provide them.  I wish I had the absolute faith in God that George Müller had.  I would so much like to get past fear and onto love the way God intended.

We’re not concerned with morals, or higher ethics, only the reduction of crime.

Didn’t remember any dreams last night.  Was up from 4:45AM Friday until 1:15AM Saturday morning so was really tired, slept hard other than a 4AM bathroom break.

Yesterday started off with a men’s church group I attend from 6AM-7AM, then came back and worked on a backlog of accounting work, then getting a newly rebuilt server (I7-2600 based system replaced with i7-6700k based system, old system Centos 6, new system Ubuntu 15.04).

There was a lot to do.  First finding the sweet spots in terms of CPU core voltage, speed, and temperatures is a trick on the i7-6700k.  There is a narrow range of voltage where you can get the maximum speed without it overheating even with a massive cooler.  The primary problem with these chips is not carrying away heat transferred to the heat sink, it’s getting the heat to transfer to the heat sink.  These chips use a 14nm fabrication process so there is an extremely small but dense heat source.  The internal compound between the chip and the lid really is inadequate so that is a limitation that is not easily overcome.  Then the thickness and the type of compound to transfer heat from the lid to the heat sink is so critical.

Anyway, best I could get stable (using three different mprime tests) was 4.4 Ghz on all cores, not quite as good as the previous machine.

Then getting Ubuntu 15.04 configured.  Ubuntu 15.04 has much newer everything than Centos.  The VirtualManager and underlying Qemu/KVM capabilities are much more advanced, and the kernel is much better than the antique 2.6.32 kernel used on Centos 6.

I opted to go with Ubuntu instead of Centos7 both because Ubuntu is much better at staying current, has in service upgrades that work most of the time instead of requiring a full re-install, and because they are more likely to actually test an upgrade before kicking it out, something that has become a problem with CentOS since RedHat took it over.

So I spent the morning and afternoon doing that.  Then when my wife was alive, we went out grocery shopping.  Coming back I was already tired, suffering bad road hypnosis on the way back and really worried about my ability to get to the co-lo and get the work I needed to get done.

I ingested mass quantities of caffeine in the form of cans of diet coke.  Took the server and new shelf down and the installation went relatively smoothly except Isomedia had not made the second jack live so we could get off the flaky data jack, so that’s still an open ticket.

Stopped at at Purple Dot on the way back and got some hot-and-sour soup.  I like theirs the best of any place I’ve ever been.  The place isn’t what it was under the original ownership but still good food.

Managed to get back without passing out while driving.  The caffeine lasted long enough.  But once I was out, I was out.

If something got here from another star system, odds are good he’s going to be taking you out for walks not the other way around as suggested in this song, or cooking you up for dinner.  The Twilight Zone episode “To Serve Man” comes to mind.

To Serve Man is a Cook Book!

I almost always remember color in my dreams, as in my two recent posts, one being about a mystical unreal Los Angeles with everything lit up colorfully, or the one in Alaska with prismatic clouds.

I keep reading that most people dream in black and white.  I wonder if this is really true or if most people just don’t remember the color in their dreams?  I know I remember my dreams better than most.  It’s rare for a night to go by where I don’t wake up remembering at least two or three significant dreams.  That leads me to believe I just remember the color better than most as well.

So how about you?  Do you dream in color or black-n-white, or do you remember?

Or maybe I just like color.  When I used to photograph with film, I NEVER shot black-and-white film, and that’s not to say I don’t appreciate the tones and patterns in a black and white photograph but I think I am more intrinsically attracted to color, brilliant, saturated, or subtle.  Sometimes I can really enjoy subtle like the tones in faded old wood planks on an old building, or the subtle variations of color in a rock or the sky.  Or the more brilliant colors of fall tree leaves.

I think it relates to my outlook on life.  There are few issues I see as black and white, my Democratic liberal friends accuse me of being a conservative Republican, my Republic friends accuse me of being a radical liberal, a threat to the American Way, and I guess surely I am, or would be if I could actually affect change, because invading other countries, stealing their resources, and killing and mangling their population is something I’m against and if I could change it I would, but my inability to do so thus far leads me to think I’m not a big threat, as much as I would like to be.

Had another dream last night.  I was in Alaska (never been) and was going to take photographs at night.  Had two tripods with me, the one I normally use, and an older one that is a bit gimpy (the things that hold the legs in place don’t anymore so they slip and compress on their own).

There was no aurora but there was a full moon out and partially cloudy sky, and in front of the moon were strongly prismatic clouds and that was what I was intent on photographing.

There were others there as well, and we all climbed a hill to get the best possible view.  I stopped and was setting up my good tripod and left the other lying on the ground.  Someone else climbing the hill snatched the old one.  I woke up at this point.

I dreamt I was in the last day of high school.  It was not realistic, we had computer programming courses.  When I was in high school, the only computer we had was in the math lab, it had a whole of 512 bytes of “core”, memory that consisted of a matrix of ferrite beads with wires through them to write and read their magnetic state.  But in the dream, they were reasonably modern computers.

But what was central was the idea that I was leaving and would never see many of these people again.  And the reality is that I’ve only kept in touch with a handful of the people I went to school with.  Something I now regret.

This is the first CD I’ve bought since 2009 when I went to prison.  It is Tijuana Panthers album Poster.  I thought it was interesting that the CD case is no longer plastic except for the part inside the sleeve that the CD attaches to.  You need a microscope, or a scanner, to read the lyrics.

They were on KEXP recently, I enjoyed every piece they played. Particularly I enjoyed the piece Front Window Down.  The album was engineered well, clean, not clipped.  Some of their music is on Grooveshark, some on YouTube, but neither does justice to the audio quality of the album, but those are some places you can check out their music.  Front Window Down is on YouTube.

Click on the images to see the full size version. 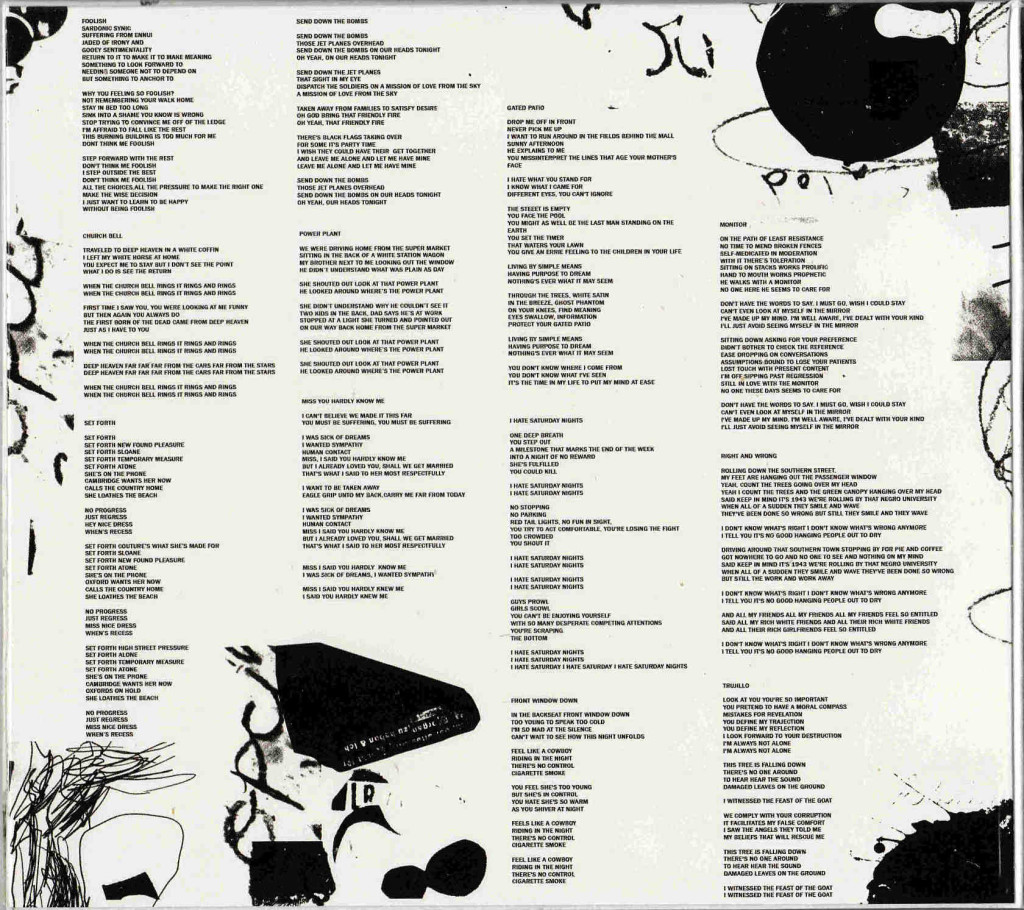 If an application must break and must give an error message, then it should be like this one:

Our search servers have positively flipped out. We’re flogging them into submission, please bear with us.

That was an error produced by the MusicBrainz.org website.

I don’t agree with much of what anonymous does but I agree wholeheartedly with this message.