Had a dream placed in the future near where I live.

In the present, they will be building a light rail station to be completed in 2023.  The downside to this is that they are rezoning the neighborhood to become urban slums.

Some years ago, our wonderful city council turned a 4-lane 185th street into a two-lane with turn lanes and bike lanes.  They reduced the speed limit from 35 to 30.  The combined total of these changes was to significantly increase traffic congestion during peak hours.

They’re building a light rail station at 185th and I-5, this will no doubt increase traffic significantly as well the six story apartment buildings with no parking on an already overloaded road.

I like trains, if they’re not overcrowded and you can actually sit and relax to your destination.  I have a hunch though that these will be overcrowded since economics favor stuffing as many bodies in a box as well fit under pressure.

I used to really enjoy driving when I was younger.  Now with all the SUVs and the morons that usually drive them hogging the road, not so much anymore.  Trains would be okay.  But apartments and I wouldn’t get along well, I’m too noisy.  And apartments tend to be incompatible with large dogs.  I lived in one for eight years, I hope I don’t have to return to that style of living.  It was not fun.

Maybe not so bad if trains are cheap and I can travel willy nilly just for fun.

In addition to the pain of constipation, I had a lot of muscle tension in my feet and lower legs and to a lesser degree my back last night.  Not quite to the point of cramps but to where they were uncomfortably tight.

Am a little frustrated with the problems I’ve been having getting one customers computers to work properly.  Not just one issue, multiple issues.  Fix one thing and another rears it’s head.  But not enough to cause great tension.  I think I’m being dinner for some microscopic critters.

If thoughts could kill, every spammer on the planet, including phone and fax spammers, would instantaneously have their heads explode.

Somehow pain and gas seems a quite natural follow-up to Sarah Palin.  Interesting the only difference between Pain and Palin is the ‘l’ in the middle.

Sorry if this makes it to linked in.  I’ve disabled linked-in in my social media plugin but it still seems to propagate some posts for reasons I’ve yet to discern.

Anyway, last two nights I’ve experienced substantial intestinal pain and gas and constipation much like after the three courses of antibiotics.  The night before last, I had three cans of diet coke and four quart sized glasses of iced tea and a glass of pure cranberry juice which was very acidic so not real surprised but yesterday I didn’t abuse my digestive system at all so no idea why last night was still bad.

Hard to function in the day when I can’t sleep at night.

Given the list of republican presidential contenders thus far, I wonder when she will enter the race?  Seems to me Sarah and The Donald would make excellent running mates.

I am Sooooo tired today and I don’t know why.  Slept relatively well and long last night.

So far three giant (quart sized) glasses of iced tea, the fully caffeinated variety, haven’t touched this overwhelming drowsiness.  I’m afraid to touch anything for fear of breaking it.

Litter along the along the roadside is nothing unusual here in Shoreline.  Really some real obnoxious people seem to frequent these parts that don’t give a damn what they do to their surrounding environment. 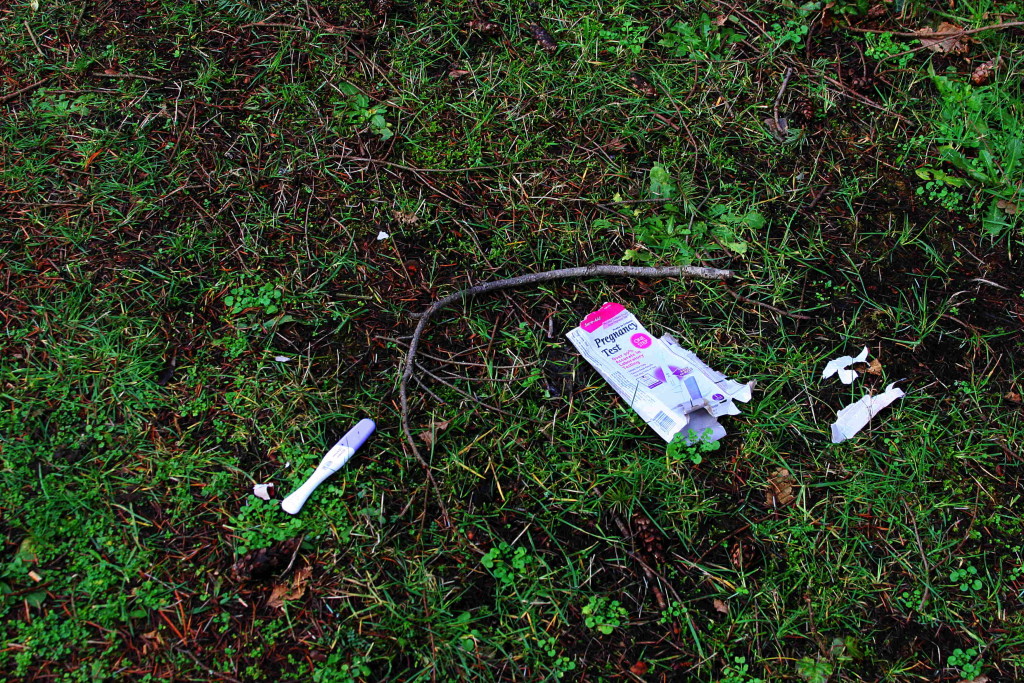 But this particular litter item struck me as both sad and humorous. Humorous because I know how these things are used and for someone to be using them along side the roadway, well to say the least it seems like not the best place. Sad because I’m thinking this was probably a young girl being afraid of being caught with a pregnancy test kit at home.

There may be limitations of our understanding of the universe based upon the way our brains function.  … And for Republicans, that’s already happened.

It’s amazing the lengths that humans will go in order to try to explain away God.  All we are really doing is pushing first cause back farther in cosmic history.