Mozilla has decided to block all Flash plugins, even the very most recent, for security reasons.  I wouldn’t mind a warning, I wouldn’t mind even if this were the default behavior as long as there were some way to override it, but there isn’t.

I hate Chrome, I hate the fact that anything and everything I do will be recorded forever in Google’s servers if I use Chrome.

Opera on Linux is a kludge.  The user interface really sucks rocks, or worse.

Firefox had a good interface, and it has development tools that are really useful, but this stupid move on Mozilla’s part ruins it for me and I’m sure a lot of other folks.  Way to go aholes!

Here is a Crown Vic I’d like to have, although I’d prefer a ’55 to this ’56 because ’56 was the first year of printed circuit board instrument clusters and they were problematic and also because ’55 used a large distributor that was trouble free but ’56 they made it too small and it was prone to flash-over.  In ’57 they went back to a larger less problematic design making the distributor caps for ’56 unique to that year and thus somewhat more difficult to find and at the same time a frequent need to find them because of failure. 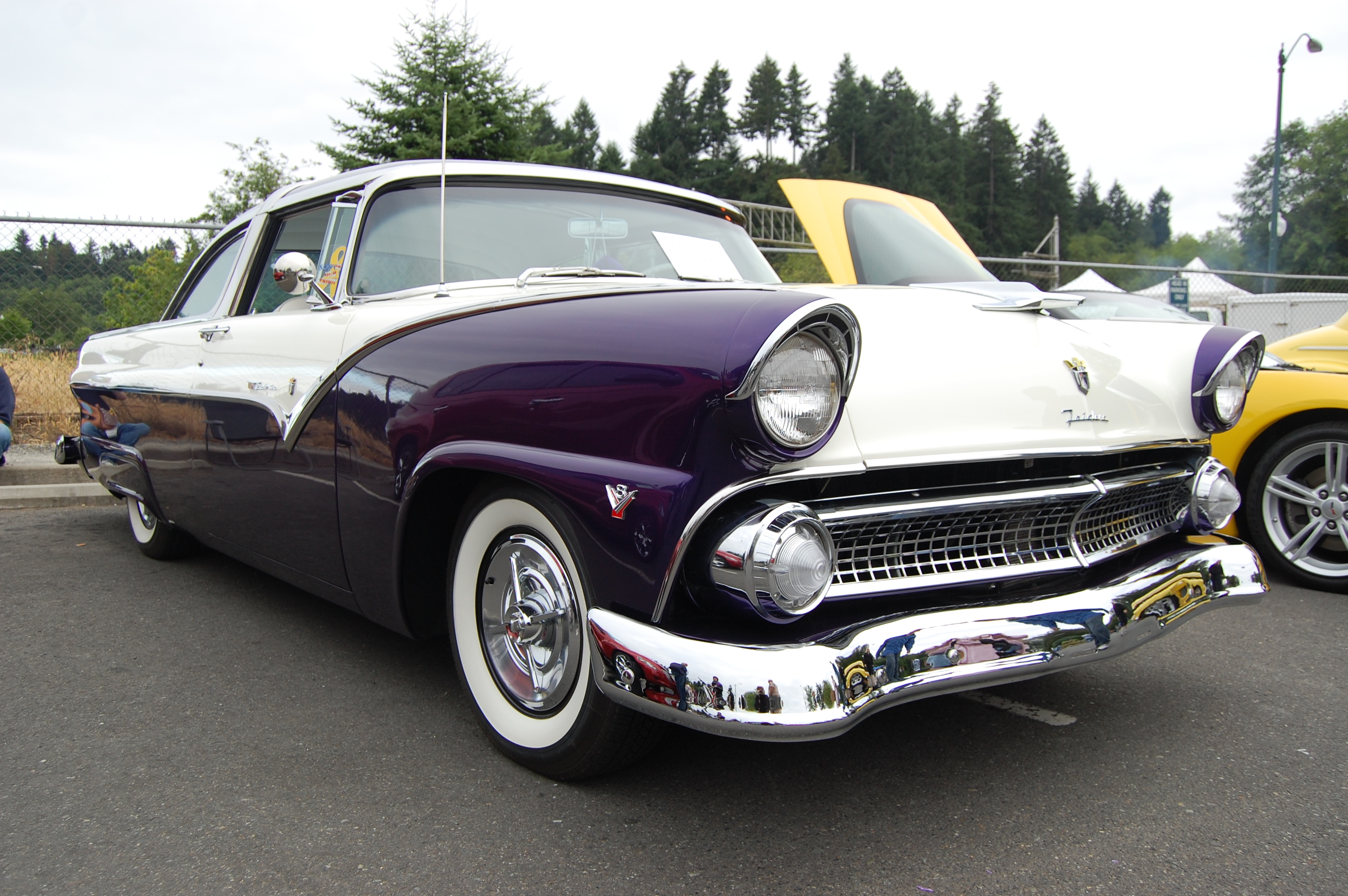 The heater core on my 2000 Crown Victoria has sprung a small leak.  I’ve ordered a new one but not looking forward to the process of replacement as it involves tearing the dash apart, dropping the steering column and disconnecting a bunch of crap to get to it.  Hoping I can bribe or otherwise cajole my oldest son, Carl, into helping me as I don’t understand half the terminology in the instructions.  Most of my experience with automotive repair comes from the days before cars had computers and a gazillion sensors and unnecessary plastic pieces everywhere.

Party 1: Humans are evil, we are killing the planet, technology is bad, population is bad, we should all die and barring that we should all become Amish.

I don’t buy either camps story.  Global warming is real, it isn’t caused by humans but it is exacerbated by humans.

The planet started out life with a primarily carbon dioxide atmosphere.  99.5% of that carbon dioxide has been sequestered and is now buried as limestone and hydrocarbons.

The bad news?  Faster growing plants absorb fewer minerals from the soil, many of which the plants don’t need and just absorb as a by-product of osmosis which carries minerals they do need and water up their roots.  That’s not real bad news from the plants, but it is for animals which depend upon these nutrients the plants absorb.

All that said, the Bible makes it clear that Earth was made for us humans.  And… it tells us to be fruitful and multiply.  It seems like we got the latter part of that command but not the former so much.

So I don’t buy the whole humans are evil and killing the planet bit.  I do believe that being more fruitful involves among other things, getting along with each other and using technologies in ways that are in harmony with the planet and not opposed to it.

With respect to the run-away greenhouse theory, I would ask this simple question, if this were possible, since the Earth started with an atmosphere almost entirely of carbon dioxide, why didn’t it stay this way?

Because the theory is bunk.  The reason Venus has such a huge amount of carbon dioxide isn’t because of a run-away, it’s because Venus being closer to the Sun lost most of it’s hydrogen to interstellar space and probably had less of it to begin with as volatiles tend to be in short supply nearer the sun, and thus ability to make water in large quantities.

As the sun continues to heat up, in a billion years or so we will lose most of our hydrogen into space, and the Earth will become like Venus.

What is going to happen if we put too much carbon dioxide into the air is that it’s going to become uncomfortable for us and more cold climate species will die.  Maybe we will make it hot enough for our own survival to become difficult to impossible.  But once we are gone, the Earth will eventually re-establish equilibrium and new species will evolve to fill the niches created by the current extinctions.

So I do believe that continued transformation from an economy based upon burning hydrocarbons is in our best interest as well as the interests of many species with which we share the planet.

That said, I see a lot of good things happening in this regard.  Denmark recently generated more than it’s entire national consumption in wind energy and actually sold surplus to Germany and some other neighboring countries.  This proves that what utilities keep saying, that the grid can’t withstand more than 20% or so renewables, is just bunk.  This level has been exceeded in Germany and the Netherlands as well.  They key in those countries has been geographical diversity, and we have much more geography to diversify over than any of them.

Some downer news, Lockheed Martin has pushed out the date for their fusion prototype to be ready from 2017 to 2025, guess they must have got the funding they were looking for.  Sad to see this as I was not only looking forward to a new energy source but also for a big part of the military-industrial complex to have something productive and good to do rather than their usual destructive and evil doings.

Been using the Google Sitemap generator but it sucks allowing only one update per month so trying to figure out how to get another to work but can’t see how to force it to generate a sitemap.xml file.

What this guy is saying about people with mental illnesses being incarcerated is completely true.  At least a third of the population at Airway Heights had some major form of mental illness, manic-depressives and schizophrenia were common.  At the Monroe Complex they have a whole prison dedicated to people who are mentally ill.

What the state claims about the prison systems, that there is good healthcare, food, etc, is total bullshit.  The healthcare is almost non-existent.  I watched a guy collapse daily because his pacemakers battery was dead and the state wouldn’t do anything about it.  I saw people with severe mental illness repeatedly attempt suicide.

Went to sleep with an upset stomach.  It wasn’t liking the spices I had in Tacos, of which I ate three, for dinner.  Had nightmares all night of being back in prison mostly, some other nightmares as well.  When my wife came home from work I woke up out of a prison nightmare and went right back into one.

They are distorted in terms of the realities.  In prison you have two release dates, an estimated release date which is the day you’ll be released if you stay out of trouble and don’t lose any good time, and a hard release date which is when your sentence ends and they have to release you unless you’ve done something severe enough to bring up new charges such as assaulting an officer.

In real life, I didn’t lose any good time, but in the dream, I had as they say “maxed out”, meaning I had gotten to that hard release date and still they didn’t release me and nobody would tell me why or when I would be released.  I was trying to contact the CUS, that’s the supervisor over a living unit, to find out what was going on, unsuccessfully.  This has been a repeating theme in these dreams.

It’s been three years and three months now and I’m still having these dreams, perhaps they’ll be with me the rest of my life. The other dreams dealt with economic woes and housing.

I’m going through a bit of a depression right now, combination of economics not being good, having two kids that won’t communicate with me, one that I can’t communicate with by court order, the death of my mother is still on my mind, the health of my father, the death of several long-term customers recently.  I don’t understand why life has to be so difficult at times.

There are times when God really makes his presence felt and others where he seems to just stand back and let me do my own thing, even when I ask him for guidance and that usually ends in some sort of disaster.  Right now I’m going through one of the latter periods.

We wander through life and give things a little shove and set them in motion.  We can’t know with any certainty where it will lead.  But if we lose faith, we stop even starting things moving.  When we can’t see the outcomes, at least for many years, it can be difficult to keep the faith.

About ten years before I went to prison, I used to be a person that was often up very late and as a result, slept in very late.

At 9am every Saturday, Jehovahs’ Witnesses used to come to my door and I’d be forced to get up, slap something on and deal with them.

One morning, really not in the mood for this I told them I was Buddhist to get them to go away.  And they did, for about ten years.  They came to my house the evening before I was to go turn myself in to King County and go to jail.

What they witnessed to me was so entirely spot-on to my situation, including Romans 8:28, “And we know that all things work together for good to them that love God, to them who are the called according to his purpose.”, that I absolutely knew God had sent them and was using them for this verse had been given to me from every direction since the detectives first came to interview me.  It let me know all of what I was about to endure was part of God’s plan and answer to my prayer.


I knew all of this was in answer to a prayer when I asked God, “Make my heart right”.  I’ll grant you that is still a work in progress and I believe will be until the day I leave this rock for good, but I can also say it’s a lot more right than it was before I said this prayer and this whole process started.

In prison, I took a course on Mindfulness Meditation that was offered by a group of Buddhist volunteers that came into the prison.  These people weren’t Christians, yet, they were compassionate, non-judgemental, and above all loving individuals and that was at the center of everything they did.  And it’s ironic that they were able to help me in my life after I used them as an excuse to get rid of the Jehovas’ Witneses so many years earlier.